The move comes after the World Bank also downgraded its economic growth forecasts for India and the South Asia region owing to supply chain disruption and the fallout from the Ukraine crisis.

The minutes of the latest Reserve Bank of India meeting showed that almost all of the policymakers argued in favour of curbing inflationary pressures, in the latest meeting. Whilst the central bank decided to keep its lending rate at a record low it said following the meeting that it would look to move away from its ultra-accommodative policy and move the focus to controlling inflation.

The US Dollar is rising across the board. The US Dollar Index, which measures the greenback versus a basket of major currencies, trades +0.3% at the time of writing at 101.45, building on gains from last week.

The US dollar surged last week following comments from Federal Reserve Chair Jerome Powell who practically confirmed a 0.5% rate hike in May but also suggested that there could be several outsized rate hikes before the end of the summer. This was more hawkish than what the market was expecting, lifting the USD.

There is little in the way of US economic data due to be released today. However, across the week US GDP and PCE inflation data is due. 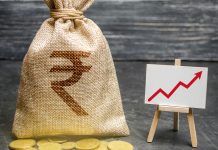 USD/INR: Rupee Rally Paused By Biggest Sell-off in a Month