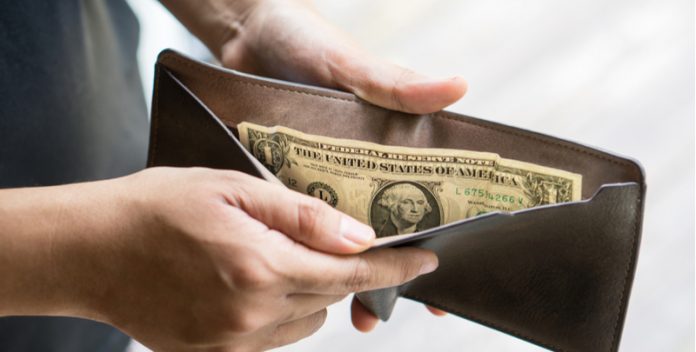 Mixed UK jobs data sent the pound tumbling versus the US dollar on Tuesday. The pound US dollar exchange rate hit a post Brexit and a day’s high of US$1.4377 before tumbling below US$1.43.

UK jobs data contained some encouraging points and some disappointing figures. UK unemployment dropped to 4.2%, beating analysts expectations of 4.3% and reaching its lowest level since 1979. However, average wage growth, arguably the most watched aspect of the report, remained constant in the three months to February at 2.8%. This is lower than the 3% that analysts had pencilled in and the disappointing figure sent the pound lower.

Whilst pound traders focused on the fact that wage growth missed analysts forecast, wage growth did finally outpace inflation. In February inflation dropped to 2.7%, whilst wage growth was at 2.8%. easing the pressure on the consumer. UK households have been under pressure with elevated prices eroding wage rises since January last year. This pressure of falling wages in real terms has dampened consumer spending power. February finally saw this change making the consumer stronger. A stronger consumer is beneficial for the UK economy which is so dependant on the consumer spending. Therefore, even though wages missed analysts expectations, the Bank of England could still look to raise interest rates in May, thanks to the stronger consumer.

Today market participants will turn their attention towards UK inflation data. Analysts are expecting inflation to remain constant in March at 2.7%. Any signs of inflation dropping closer towards the BoE target of 2% could encourage a more aggressive BoE when they meet in May.

The dollar was broadly in favour in the previous session as US tensions with Russia eased and investors digested unambiguously positive US housing data and hawkish comments from Chicago Federal Reserve Chair Evans. Evans commented that the US economy was firing on all cylinders and that the economy could absorb gradual rate rises without any big changes to inflation.

With no major US releases due today, investors will look instead towards comments from Fed’s Dudley over the economic outlook.

The pound traded in a tight range versus the euro for most of the session on Tuesday, as investors digested disappointing data from both sides. The pound euro exchange rate traded from €1.1565 to €1.1600, its highest level in 11 months.

The pound dropped heavily early on following mixed U.K. jobs data. Unemployment fell as analysts predicted to 4.2%,the lowest level since 1979. However, average earnings remained constant in the three months to February at 2.8%, missing analysts forecasts of an increase of 3%. The pound dropped as the data was weaker than what traders and analyst had been anticipating.

Whilst the pound fell on the disappointing number, there was a positive element to the figures; wage growth overtook inflation in February, which was 2.7%. Since January 2017 consumers have been experiencing falling wages in real terms as elevated prices eroded lacklustre wage growth. However, in February wage growth overtaking earnings means that the squeeze on the U.K. consumer is finally ending. A stronger consumer should help support the economy and encourage the Bank of England to hike interest rates in May.

Investors will now turn their attention to inflation data tomorrow. Inflation had been elevated at over 3% over the past five months, falling to 2.7% just as recently as February. Market participants and the BoE alike will be keen to see inflation remaining on the path towards the central banks target of 2%.

A worse than expected decline in German investor sentiment kept the euro out of favour in the previous session. The ZEW German economic indicator dropped to -8.2 in April, down from 5.1 in March and significantly worse than the -1 expected by city analysts. This is is lowest level recorded since 2012 when the eurozone was in the midst of the debt crisis.

The decline in confidence comes at a time when concerns are growing that economic growth in the bloc is losing momentum and as concerns grow over a potential trade war with the US could hurt exports from Germany, the powerhouse of Europe.

Eurozone inflation data could create some volatility today, if it comes in lower than the 1.4% that analysts are anticipating. A lower figure could reduce the odds of an interest rate rise from the already cautious European Central Bank.