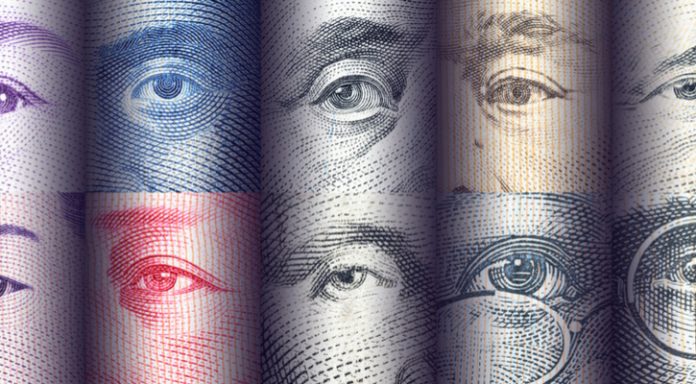 The pound rebounded off a low of US$1.23 on Wednesday to close the session flat. The pair is once again moving lower on Thursday as investors digest yet more downbeat data for the UK.

The pound was edging lower in early trade on Thursday following a spate of gloomy business reports. The British economy appears to have tipped into recession as businesses brace themselves for a disorderly Brexit in just a few weeks’ time. The UK’s dominant sector, the service sector slipped into contraction in September with the PMI hitting a six-month low of 49.5. The figure 50 separates expansion from contraction.

When combining today’s downbeat reading with deeper contractions in both the manufacturing sector and the construction sector, IHS Markit, who produce the reports said that the UK looks set for an economic contraction of -0.1% in the third quarter. This would be the second straight quarter of contraction, after GDP shrank -0.2% in the second quarter. This is a technical recession.

Brexit talks are continuing after Prime Minister Boris Johnson revealed his final Brexit offer, addressing the problematic Irish backstop issue. So far, the proposal dubbed “2 borders, 4 years” has been well received by Eurosceptics and the DUP, indicating it could make it through Parliament. The EU are still mulling over the plans. Investors are doubtful that they will be accepted. A rebuff could send the pound sharply lower, as the chances of a no deal Brexit would increase dramatically.

The dollar fell out of favour once again in the previous session as concerns grew over the health of the US economy. The US ADP private payrolls report showed that the monthly average number of jobs created was just 145,000 compared to 214,00 a year earlier. These figures show that the pace of hiring is clearly slowing as the demand for hiring weakens.

The ADP report is closely correlated to the all-important US non-farm payroll, which is released on Friday. With weak private payroll figures and a weak employment component to the manufacturing report investors are not expecting outstanding numbers.

Prior to the non-farm payroll figures, investors will first consider today’s ISM non-manufacturing data. Like the UK, the service sector is the dominant sector in the US, therefore data covering the sector is watched closely. Analysts are predicting that activity in the service sector slowed to 55 in September, down from 56.4. The level 50 separates expansion from contraction. Should the sector show further weakness, fears of recession could grow, dragging the US dollar lower as investors assume the Federal Reserve will cut interest rates again.