Home GBP Pound Continues To Slide Versus the Dollar, as Fed Minutes Come into... 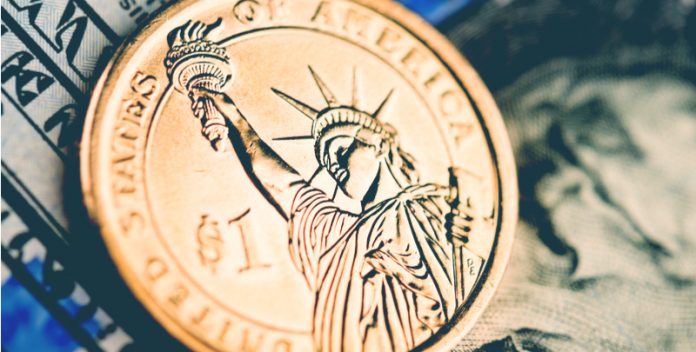 The pound continued to slide versus the dollar on Tuesday, marking its sixth straight day of decline. The U.S. was closed as it was Independence Day, although the U.S. dollar market remained open. During the course of Tuesday, the pound weakened 0.2% against the dollar, dropping from a high of $1.2949 to a day’s low of $1.2913, before closing the session at $1.2918.

Today sees the release of the service sector PMI. This is the last of the PMI’s released this week and the most important given the dominance of the sector in the UK economy. Earlier in the week data showed that both manufacturing activity and construction activity growth had slowed more than analysts were expecting as political uncertainty weighed on sentiment.

Although manufacturing and construction activity only account for 10% and 6% respectively of the UK economy they are often seen as indicators for the service sector reading. A lower than forecast reading for service sector activity could bring the pound even lower as it would add to evidence that the UK economy is not yet strong enough to warrant an interest rate rise. When investors start to think that an interest rate hike is being pushed further into the distance, the currency will usually decline.

Dollar traders will search for clued in Fed minutes

Today, investors will be keeping an eye on the development of geo-political tensions with North Korea after the nation reportedly successfully tested an intercontinental missile.

Looking towards more domestic events investors will also be focusing on the U.S. Federal Reserve Minutes, due to be released later this evening. The minutes from the meeting last Wednesday could impact on the markets. If the minutes show that the Fed appears to be confident that inflation will push higher or that the central bank is showing signs that it may look to raise interest rates, the dollar could rally.

Currently the market is putting the probability of another interest rate hike before the end of the year at 50%. When interest rate expectations are on the increase the currency will usually move higher, so a positive Fed tomorrow could strengthen the dollar pulling the GBP-USD exchange rate lower.