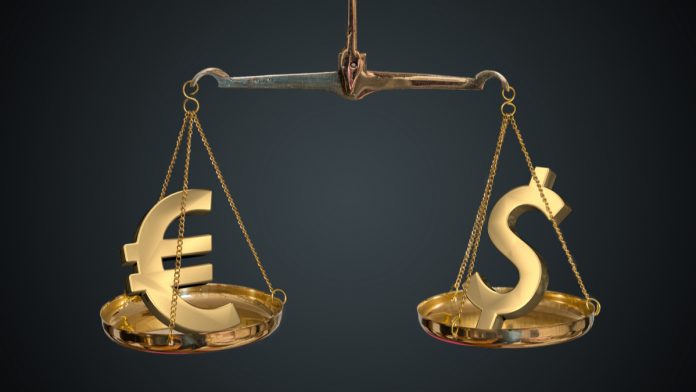 The euro US dollar exchange rate started the previous week at US$1.0976 and remained range bound until Wednesday. The pair dropped sharply in early trade on Wednesday, before rebounding off US$1.0941 the weekly low and advancing through to market close on Friday.

The euro reached a three-week high versus the dollar, before closing up 0.3% at US$1.1037 on Friday. Across the week the pair gained 0.5%. This was its second straight weekly increase. The euro US dollar exchange rate has gained over 1% across the month to date.

The euro started the previous week broadly out of favour as investors were unable to shake off concerns over the health of the German economy and more broadly the eurozone economy.

Evidence of Germany slipping into recession and the eurozone suffering from slowing momentum kept growing across the week. German factory orders plunged 6.7% month on month in August, falling for the 15-straight month. German exports dropped unexpectedly 1.8% month on month in August, below the 0.8% increase than analysts had forecast. German inflation remained stagnant at 0.9%, well below the European Central Bank’s 2% target.

The data highlighted the impact of the German manufacturing slump amid the ongoing US China trade dispute and slowing global growth. Following another week of soft data, investors grew increasingly convinced that Germany tipped into recession in the third quarter. This weighed on the value of the euro across the start of the week.

The other big focus for euro investors were the minutes of the European Central Bank monetary policy meeting. The minutes from the September meeting, combined with a letter to the Financial Times, showed that the European Central Bank (ECB) dismissed objections from its own officials regarding restarting its quantitative easing or QE programme. The programme, also known as a bond buying programme injects money into the economy by buying up state bonds.

The minutes highlighted a growing division between policy makers at the ECB over the dovish stance being adopted at the central bank, as it battles the economic slowdown in the eurozone. The first task for incoming President Christine Lagarde will be to fix the rift among policy makers. As long as the rift remains, euro investors are assuming that there will be no more monetary easing. As a result, the euro moved higher.

The Dollar lost ground across the week following mixed data, dovish Fed speak and growing optimism of a US — Sino trade deal.

US data across the week was mixed. On the one hand, inflation as measured by the consumer price index (CPI), stagnated at a 7-month low of 1.7%, rather than popping high to 1.8% as analysts had predicted. However, on the other hand, US consumer confidence unexpectedly jumped in October to 96 points, up from 93.2. A strong consumer tends to spend well, propping up the dominant service sector. Therefore, this is considered good news for the US economy.

Federal Chair Jerome Powell, in addition to several other Federal Reserve policy makers made speeches across the week. The minutes to the Fed’s September meeting were also released. This was the Federal Reserve meeting where the central bank cut interest rates by 0.25%, but gave no indication of any further interest rate cuts to come.

The basic consensus from all the Federal Reserve updates were that most Federal Reserve policy makers are in favour of another interest rate cut this year. Policy makers are also more concerned over trade issues, geopolitical tensions and slowing foreign economies than they are about the health of the US economy. By mid-week when, the minutes to the Federal Reserve September meeting were released, the CME Fed watch tool showed that investors were assuming an 80% probability of an interest rate cut in October. By the end of the week that had dropped to just 60%, but that was owing to trade developments. The Fed Watch tool is an important gauge because when interest rate cut expectations rise, the dollar often falls and vice versa.

It all about trade

The lead up to the start of the 13th round of US — China trade talks was tense. Trade and the ongoing trade dispute have started to negatively impact on economies across the globe, including the US and China. Investors were more anxious than before previous talks for some form of deal to be achieved.

Ahead of the talks there was plenty of negative news, as President Trump blacklisted twenty plus Chinese tech firms and restricted the visas of Chinese officials in a move that angered China. Investors feared that the talks were destined to fail before they had even started.

China had made it clear that they were interested in a limited deal, not the far reaching, broad deal that President Trump has been pushing for. After two days of talks and a meeting between President Trump and Chinese Vice President Liu He, the first phase of a deal has been completed.

The dollar was moving lower across the week as trade deal optimism grew. The main reason for the dollar’s decline is because it is a safe haven. The US dollar is the reserve currency of the world. In times of elevated geopolitical tension, investors buy into the dollar for its safe haven properties. When geopolitical tensions ease, as the have across the second part of the week, investors no longer require the protection of safe haven assets and have sold out of the dollar, pulling it lower.

The first phase of the trade deal between the two powers involves China buying more farm goods and the US delaying next week’s tariffs. The two sides also agreed to certain intellectual property measures and concessions related to financial services and currency. Despite the clear progress that has been made, there are still some thorny issues which remain. Trade will remain a central theme for dollar investors at the start of this week.