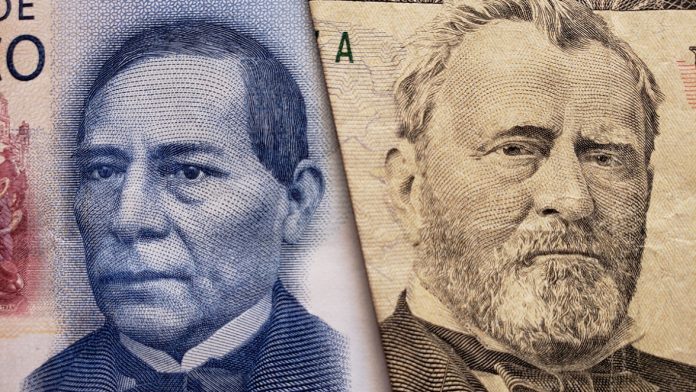 The pound US dollar experienced heightened volatility on Wednesday. UK and US economic data in addition to US — Mexico trade and immigration talk progress drove trading. The pound US dollar exchange rate rallied to a high of US$1.2744 to before closing lower at US$1.2683.

The pound shot higher in early trade on Wednesday as investors reacted to better than forecast UK service sector data. Analysts had been expecting the service sector pmi to have ticked higher to 50.6 in May. Instead, activity in the service sector hit a three-month high of 51. Earlier this week manufacturing and construction sectors had reported a contraction in May, so the stronger data for the dominant service sector was well received.

However, the lift higher in the pound didn’t last long. The reality is that while the service sector expanded, it was insufficient to make up for the contractions elsewhere, meaning that the UK appears to be stagnating in the second quarter. Brexit uncertainty and fears of a global economic downturn are weighing on businesses and paralysing decision making.

Today there is no high impacting UK economic data. Pound investors will look ahead to Friday, UK Prime Minister Theresa May’s last day in office. From there political analysts expect the Tory leadership battle to start in earnest for a six-week period.

The dollar started the previous session on the back foot but soon leapt higher. Data released from the US was mixed. Weak ADP private payroll initially pulled the dollar lower. The data showed that the lowest number of jobs were created in a decade in the private sector. This reinforced fears over the health of the US economy. The ADP data was quickly followed by ISM non-manufacturing figures, which were stronger than what analysts had been predicting.

Following cautious comments from the Fed earlier in the week, dollar investors are watching US data carefully for signs of weakness. Sofer data could shift the Fed policy towards cutting interest rates.

Attention quickly shifted the US — Mexico trade and immigration talks. Officials have suggested that a deal could be reached as soon as today to avoid tariffs being applied. The good news boosted the dollar. However, overnight the news flow changed, and Trump said that more progress was still needed. Mexico will be slapped with 5% tariffs from Monday if no deal is agreed to.